Can you picture a snow globe? My grandmother had a big one when I was a little girl. The size of a mellon. (well maybe a softball) It was big. It had a magical world inside – an old-fashioned village  with itty bitty buildings, Christmas garlands strung on tiny picket fences, a little church in the center of the town, and a dark green forest all around the edges. I liked to hold it still so I could see the details of this miniature world. But my grandma must have thought I didn’t know how snow globes worked. She’d take it out of my hands, roll it around and shake it until the scene was completely obliterated by a blizzard and then give it back to me, smiling. Chaos! I’d go back to holding it very still until the snow settled and the town came slowly back to life.

The story of creation is just like that snow globe, but the other way around. At creation, chaos was everything, everywhere, swirling around – dark energy filling an expanding void.… And into this disarray, God blew a shining bubble.  Can you picture it?  I know the reading doesn’t say that God blew a bubble, but that’s because we can’t read ancient Hebrew. Actually, it doesn’t say it in Hebrew either,  but some words that are difficult to translate, and that difficulty allows for interesting options and possibilities… The Hebrew word is rakia.

It’s translated as “dome” or “firmament” or “vault”.  All three translations refer to something solid, an impermeable barrier whose function is to separate creation from the swirling chaotic watery void outside, to provide structure and space and order for the inside. I’ve always pictured a kitchen colander. God set an upside-down colander in place to separate the waters above from the waters below. The rain and snow come down through the little holes that God would open and close. That was the imagination of ancient biblical cosmology. God allowed the waters from above to rain down and the waters from below to swell up creating the conditions for life on earth. Or, God would close the colander holes, withholding water, and the earth and its creatures would suffer, praying for mercy.

I just read an article, though, in which rakia was described, not as a dome or firmament, but a bubble – like God blowing a bubble into the midst of the dark, watery void and I got a very different idea about chaos and God and creation.

Once the bubble is in place, life develops in an orderly and systematic way, just as it would under the colander. As the passage proceeds, God connects growth and abundance to order, finally commanding creation “to be fruitful and multiply,” to become co-creators. “Do as I have done for you,” God says. “Do this in remembrance of me.”

The thing I like about the bubble as an image is that it’s organic; a bubble is not a solid and static fixture; a bubble is elastic, it’s a porous boundary between the earth and the murkiness beyond. It’s more fragile, more in need of stewarding, perhaps… and more able to reveal what is out there and all around. A colander, with its little holes, is not.

Well, does it make a difference, really, how these words are translated? Does it matter whether or not we picture this rakia as a flexible and semi-permeable bubble film or a firm and solid colander or the gorgeous intricate mosaic tiling of Byzantine domes – the vault of heaven? Does it change the meaning of the creation story?

I think it might – or at least it might help us understand something different about God. Most of what we have learned or heard about of this passage focuses on what is going on inside the bubble as creation unfolds, rather than what exists outside or beyond it  – or our relationship to what is outside or beyond it. We hear that God set the dome in place and called it good, and then we turn our attention to the trees and seeds and grasses and birds and critters and creatures and sea monsters filling the scene…waiting for our moment to appear.

But thinking about the bubble dome might help us consider the connections between creation and chaos in some important and useful ways.

For most of us, chaos has negative associations. We look for ways, both individually and communally, nationally, economically, to avoid it – to manage it, fight against it, or escape from it. We think of chaos as the problem for which solutions must be found – like containment, separating ourselves from it, or imposing some kind of control. Translating rakia as dome or vault supports this view. The firmament is firm, God is our rock, immovable, all powerful, unchangeable. God and God’s firm-ament will protect us from the chaos floating around “out there” that we don’t like.

But. Does an image of God’s good creation in which chaos is held at bay serve us, or serve our faith? Does it reflect our lived experience as human beings? Does it reflect God’s intention for us, or seem to be what God is about? Does God shield, protect, and keep you from all harm? Does God prevent hurricanes – quickly using up the alphabet – from crashing into continents? Does our faith protect us from random acts of terrorism, or from disease, or loss? Is God offering some kind of buffer or shield? Is that what we expect – that chaos will bounce off the colander as we live hidden and protected within it? Is that how you’d describe your life or the world around us?

If you’ve tried to answer any of these questions, I think you’ll agree that we have a problem. If God fashioned the world so that Chaos swirls around on the outside of the snow globe and life within is untouched, then it seems pretty obvious that God isn’t doing a very good job of containment.

When I think about my own life and worries, I realize that chaos, confusion, and fear are much closer than I would like to admit. I am willing to bet that if you were to turn to your neighbor and ask a few pointed questions you would find chaos seeping into the conversation within 3 ½ minutes. The boundary is quite permeable. The bubble not only reveals the murky mess that is out there, but lets an uncomfortable amount of it in here, into our daily lives and experiences and heads and hearts. Crazy political news, malevolent missile technology, epidemics, too much rain, not enough rain and raging fires; financial markets fluctuating on a whim that affect our lives and livelihoods; violence, ignorance, racism, anger – these things flare up like magna released through fissures in the earth’s core – we are not sure where or when the next hot spot will blow…but we fear it.  Chaos is close. Startlingly close.

Much of our energy as people, as nations – even as churches – is aimed at managing our exposure, setting up barriers (artificial barriers) of protection from those “out there” – to keep our loved ones and ourselves safe. Maybe it works some of the time. Other times it certainly doesn’t. People we love get sick or injured, people we love lose their jobs or their ability to work, people we love have marriages fall apart, have a child born with a disability, people we love serve their country and come back lost, wounded, damaged by their encounter with chaos. It’s pretty close, really. Chaos is swirling around inside our snow globe of existence. Has God failed?

This is the first week of the narrative as we again begin to read the Bible from the beginning  following a thread into the biblical tapestry. Week after week we will hear about this problem, the power of the forces that defy God’s desire for abundant life in harmony with all things living. And we will have to consider this question: Has God failed?      Has Chaos won? What is the role of faith in lives that seem out of control much of the time?

I imagined little people living in the snow globe village
. And I pictured them bouncing around inside their homes, toppling out through doors suddenly flung open when my grandmother began to shake their world, I imagined them hanging onto the fence. I was a steadying force in their lives, but I couldn’t prevent chaos from coming around the corner out of the kitchen and shaking them up again. 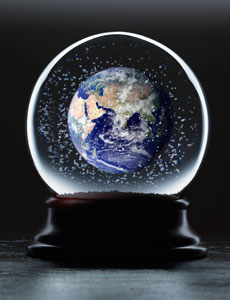 Into the dark, formless void God blew a bubble and formed the conditions for life. God created life out of chaos (not separate from it); God created life using, harnessing chaos, God created life in the midst of chaos, the creative energy and mystery and mayhem of formlessness. Doesn’t this sound better? truer? Doesn’t this more closely reflect our lives, and our relationship to God? Life is a mess more often than not. God is with us in the midst of it all, present with us through it all, guiding, shaping, supporting us – messy, mixed up lives and all. The waters were separated so that rain falls and streams flow above and below – but chaos was the matrix of creation. Birth is not painless.

What if the rakia creates a porous space in the midst of chaos in which humans live in relationship with that which we cannot control? The question then is not one regarding God’s failure in preventing bad things from happening or in somehow allowing sin to enter the perfection of Eden when his back was turned. The question then becomes one about relationship – what kind of relationship will we entertain pertaining to God and chaos and our fellow human beings and the world and the incredible complexity and diversity and symbiotic necessity of creaturely life on this planet?

Perhaps it will be one of humility knowing we are not in control – and of forgiveness recognizing that we can do only what we can do – and one of trust that God will be with us somehow – often unseen and unfelt, but present and promised. Perhaps God created a world – intentionally – in which there is both life and need. Chaos, too, may serve God’s purpose to create relationships and interdependence, and to stir the pot of change.