Creation stories begin the Narrative Lectionary each fall. I’m beginning instead with the next story – one that we don’t hear in church, yet is known in popular culture. See Genesis, chapter 4. 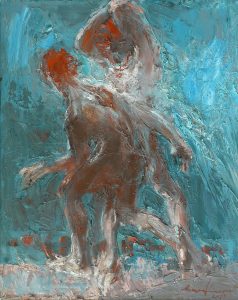 This is a creation story in a sense. It plays out the genesis of sin. Just as there are two creation accounts back to back, so we are presented with two depictions of the nature and origin of sin. The first was Adam and Eve’s debacle with the fruit tree of the knowledge of good and evil. The serpent’s temptation and the woman’s lack of moral fiber are typically (falsely) blamed for that one. Adam knew what was going on, he knew what God had told him. But the lure of temptation seems to be mixed into the mud from which we came: they ate of the fruit. God both judged and provided for this couple (and the snake) before sending Adam and Eve into the world outside the garden’s hedges and guarded gate.

Cain, the first child of earth, embodies this dangerous, conflicted knowledge of good and evil. It is a conflict we are well acquainted with. Paul wrote about it in the book of Romans: 7:15″I do not understand my own actions,” he writes. “For I do not do what I want, but I do the very thing I hate. I can will what is right, but I cannot do it…. 21 So I find it to be a law that when I want to do what is good, evil lies close at hand.”

God tells Cain, “Why are you angry, and why has your countenance fallen? 7If you do well, will you not be accepted? [of course you will] And if you do not do well, sin is lurking at the door; its desire is for you, but you must master it.”

You must master it. We must learn to master unruly dogs, classrooms of first graders and unruly middle schoolers. We must master addictions, our emotions, our desires. If we fail to master them, they will rule over us. “Sin is lurking at the door, its desire is for you.” I appreciate that sin is given this ‘poised to pounce’ quality, this sense of animation. The authors of this story were good observers of human nature. Cain had a clear choice. He had a conversation with God. He had time to think this over. He could have mastered his anger, his hurt, his acute disappointment. He could have asked God for an explanation (we would all appreciate hearing it). He could have learned to live with his brother despite his jealousy, in spite of feeling victimized by God who – for some inexplicable reason – chose his brother’s offering over his own.

He could have mastered it. But he didn’t. Instead, we can picture him fuming, spiraling down into rage and justification and vengeance, violence rising. He invites Abel out into the field.

This is a troubling tale on many fronts. It’s of some interest to realize that it’s often taught in Sunday school, but not included in any lectionary. Children understand the sibling rivalry bit; adults perhaps don’t want to look that closely within. We are faced both with temptation from things outside (forbidden fruit) and things within (jealousy, rage, greed). This is the mixed origin and nature of sin.

But what about God’s role here? First and last is the question about God choosing to favor one offering over another. Why was that necessary? We aren’t happy about the capricious, inscrutable nature of God who does things like this without a word of explanation. Is it a set-up, a test like that of Job? Did God not know the outcome, the consequences of his action? And if so, then is Abel simply collateral damage in a test of Cain’s will, of the knowledge of good and evil?   I’ll come back to this.

The second bothersome point is that Cain, who killed his own brother and then asks God the most snarky question in the Bible, “What? Am I my bother’s keeper?” seems quite concerned about his own life. That ‘anyone’ who meets him might kill him as he wanders in his banishment. Point one, that would be a form of justice for him, some might think he’s got it coming.

Point two, he was one of four people in the newly created world and now there were three. What people is he concerned about and where did he find a wife? How does he build a city in the land of Nod? Our storyteller seems to have nodded off and skipped a page!

By now you know my prejudiced perspective that these are highly edited, mythic tales which tell ancient, perennial truths about humanity and our relationship with one another and with God. They are not historically accurate, but they tell the truth nevertheless. I don’t intend to disabuse you of your opinion if it’s different than that, but this is where I’m coming from.

So therefore, I’m not concerned about the civilization that lies to the east of Eden. Adam and Eve were set down in the fertile crescent valley to tend and till and bear children with pain. That is the storyline we follow for the truth it tells. The pain for Eve of mothering continues past birth. She must now bear the pain of the death of one son and the banishment of the other who murdered his brother. So much for family bliss. This is the first family. It’s been a steep learning curve.

Adam was given the mixed vocation of farmers to tend and till. In time his sons divided that labor – Cain became the tiller, Abel tended to the flocks. It seems like a good idea. It also seems that shepherds are preferred in the Bible. Farmers hoard into barns, mistreat their workers, don’t leave enough for the gleaners who follow the harvest looking for sustenance. Kings are chosen from the shepherds. Shepherds were the first to follow the star. Jesus is a good shepherd. So God does seem to choose.

The Frugal Gourmet* offers the explanation that shepherding is isolated and yet communal. What is the word for a single sheep (sheep), for a flock(sheep)? They are plural, communal even by name. Shepherds clumped together relying on each other for help and protection. They offered hospitality to strangers and angels and sojourners. Farming, though, is about private ownership and private gain. Food is shared when it’s paid for.

Jeff Smith writes this: page 21 “In order to teach Cain about His intentions for men and women as children of God, Cain is condemned to wander forever. In that wandering he would finally come to see that the values of the Bible stem from our understanding that we are really nomads, wanderers, and we are to care for and protect one another, not just our property.”

As to the question of God’s intent, and foreknowledge, and Abel’s death… I’d like to say, “I don’t know,” because that would be true.

But, given my perspective that this is a teaching story, the lesson centers on Cain and his actions. Names – particularly in Genesis and in the prophets – are intentionally given or significant (like Isaak, which means laughter because Sarah laughed). In Hebrew folklore, Cain means ‘production’ or ‘acquisition’ – a farmer. Eve said, “I have produced a man…” A play on his name. Abel means ’emptiness’ or ‘futility’ – the perfect counterpart of Acquisition. With his life blood that spills out into the land, Abel is an empty character. Like the murder victims in Miss Marple whom we never care about, we are not to spend time grieving Abel. Cain is the protagonist in this drama of good and evil. God’s initial action of choosing is necessary to produce the action of the story. Because it’s not in accepting Abel’s offering, but in accepting Cain, in providing him with a protective mark to shield him, in allowing him to wander away from God’s righteous presence, in providing him with life and a wife and son and future – it is in this choosing – without a word of explanation – that God’s inscrutable and loving nature is taught.

The gospel comes to us through the cross. The good news of God’s over-riding, unexpected love and provision – for even the Cains of this world – is taught through death. This should be no surprise to us – that God chooses life over judgment even for those who cannot (do not) master sin pouncing at the door, those who get yanked around on the wrong end of a leash. The next chapter is a genealogy, and when chapter six picks up the narrative, people have begun to populate the world. And this: 5 “The Lord saw that the wickedness of humankind was great in the earth, and that every inclination of the thoughts of their hearts was only evil continually. 6And the Lord was sorry that he had made humankind on the earth, and it grieved him to his heart.”

The consequences of eating forbidden fruit rippled out generation after generation spreading the hubris of thinking we are like God, when there is nothing further from the truth. And still, in spite of this continued grief, God does not change his nature or intentions for human life. There is a strange justice in this kind of love – justice even for Abel, I believe – for everyone.  God alone does not receive justice. He who desires intimacy with his creatures sees them wander away, turn away in disregard generation after generation.

The parable of the prodigal son, I think, completes/retells the story of Cain. He who has wandered away, finally hits bottom and realizes that he has squandered the greatest gift, and hesitantly, but resolutely, makes a return, practicing his apology in begging for forgiveness along the way. The father, however, sees him coming a long way off. And in a manner most undignified runs all out, arms flung akimbo to embrace this wayward child, kisses his cheeks, puts the family ring on his son’s finger and proclaims a feast.

I realize that that is not the ending of the story we’re given, nor the ending of the parable, but I believe it could be. We are given the possibility to master ourselves if nothing else. And that might be enough.

* ‘The Frugal Gourmet Keeps the Feast’, by Jeff Smith